THINGS YOU MUST KNOW ABOUT ARCTIC WILDFIRES THIS SUMMER
By Lindsay Hoffmann, Waterbury, Connecticut, USA on July 11, 2020
Arctic wildfires are igniting again this summer, and the numbers are up since last year. Record-breaking heat of more than 90 degrees Fahrenheit combined with dried-out vegetation are kindling flames.
(Published on: 11 July, 2020 @11 AM) 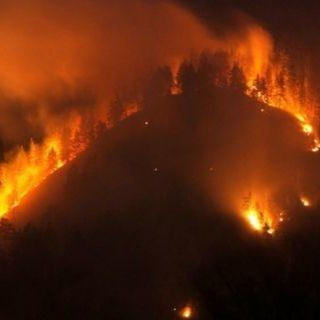 Arctic wildfires are igniting again this summer, and the numbers are up since last year.  Record-breaking heat of more than 90 degrees Fahrenheit combined with dried-out vegetation are kindling flames.  These flames are then flaring up and spreading through arctic communities such as the Novosibirsk Region in Siberia which experienced their last wildfire earlier this week.  The Earth Root Foundation is uncovering for you the top 3 things you need to know about this summer's Arctic wildfires.

1. Extra health issues this summer? The national weather service points to smoke from the arctic wildfires

The National Weather Service says that wildfire smoke is being blown southward.  Patrick Doll of the National Weather Service told Anchorage Daily News of Alaska on Monday that "It's not unusual for smoke to drift into Alaska" and that "Smoke has been reported in western Oregon and in Canada, also".  We already know that wildfire smoke can cause medical irritations thanks to updates from the American Lung Association.  In 2016, The American Lung Association reported on their website that "wildfire smoke can be extremely harmful to the lungs, especially for children".

2. Wildfires are not uncommon to the Arctic in summertime, but the rapidly increasing numbers this year are surprising even the experts

National Geographic reported on Monday that "while tundra fires are not unprecedented, scientists have documented a handful of large ones on Alaska's north slope in recent history" and "Several of the fires might even be setting geographic records".  When National Geographic asked fire researcher Jessica McCarty about the severity of this summer's wildfires, McCarty said, "I was a little shocked to see a fire burning 10 kilometers south of the bay of the Laptev Sea...when I went into fire science as an undergraduate student, if someone had told me I'd be studying fire regimes in Greenland and the Arctic,  I would have laughed at them".

3. We can make a difference just by bonding together

We all know that policy makers need to do more to secure weather protection plans in our communities and around the globe as well as legislate in favor of the Clean Air Act.  But, we are not helpless.  We can simply make it clear,  for all the policy makers to be unable to ignore, that the health of ourselves, our loved ones, and of current endangered communities matter to us.  Additionally, we can support environmental organizations who are demanding legislative change by going to the websites and putting our names on the petitions that they use to sway policy makers.

"Change is in our hands.  Let's not waste another minute!"