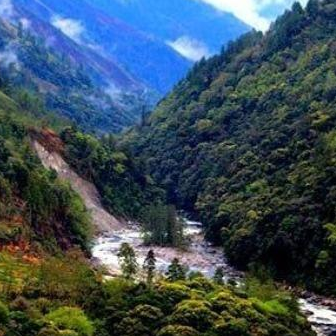 "Not every river is submissive enough to allow dams. Some are meant to be free flowing."

The project fell under one of the richest biodiversity hotspots across the World. It envisages construction of 2 dams over the two tributaries of Dibang River: Dir and Tangan. The proposal has been pushed back for a biodiversity study since the current environmental impact assessment was found to be completely inadequate. The Etalin hydropower project will involve diversion of 1150.08 ha of forest land and felling of 2.7 lakh trees in Dibang Valley which cannot be compensated through afforestation and it will result in loss of species. A Wildlife institute of India (WII) study has documented 413 plant, 159 butterfly, 113 Spider, 14 amphibian, 31 reptile, 230 birds and 21 mammalian species within the project area. All those 2.7 lakhs trees and the home of many species are in danger. Studies conducted by different researchers and of Wildlife Institute of India have revealed the present of unique tiger, endangered species, 13 vulnerable species and 3 rare restricted range endemic bird species within the project area. It had more biodiversity than any other part of India. A part from Flora and Fauna it will also impact the Idu- mishmi tribe of Dibang valley (The least tribe of Arunachal Pradesh). They had been living in the project area since ages. They will emotionally and mentally get disrupted, they will lose their land, their identity and their culture will also be in danger. They believe that Tiger are their blood- brothers and are attach with those 2.7 lakh trees which had been surviving more than 100 years.

This project can be a great economic loss to itself as independent researcher and geographer Chintan Sheth has released a report on the high risk of constructing dam in the Dibang Valley, as it lie in seismically active zone and the river mostly fed upon 350 glacial lakes. These glaciers have already thinned out due to climate change and by 2050, the electricity production capacity of these project is likely to fall.

The project area also have a great risk of flood and landslide which will be a great failure for the Etalin hydropower project and can result in wastage of government money.

Under many such negative impact of the project it won't be a successful Etalin hydropower project as it has many negative impact on Flaura and fauna, culture, climate issue, relationship between Dibang area people and their forest, land and species. There is a famous saying that - "Once lost, forever lost, cannot be found again".