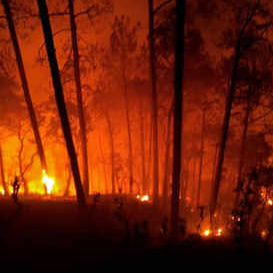 ‘Fire’ is one such element that could both, give and take lives. The rage of fire is witnessed almost every year by an Indian state- Uttarakhand. However, the intensity and probability, has considerably increased over these years; affecting the air quality, livelihood and even the Himalayan ecosystem.

The forests of Uttarakhand have not stopped burning in the last six months; that is from October 1, 2020 to April 4, 2021. Just in five days of April, 361 incidents have damaged 567 hectares, including 380 hectares of reserve forest areas. In total, almost 989 fire incidents have been noted so far, by the state forest department. Some 1,297.43 hectares of forest got burned down in the fires.

Every year forest fires begin in Uttarakhand in mid-February, which is the on-set of spring, when the trees shed their dry leaves and the soil loses moisture due to a rise in temperature. This makes the forests vulnerable to fires; and this season is known as ‘forest fire season’ which continues till mid-June in the summer. The hilly areas are prone to forest fires as the surface gets dried off faster than the plains due to lower accumulation of rainwater.

As per the experts, there are six major causes of forest fires-

1.      Fuel Load- Dry leaves, twigs, logs of wood are the potential fuel for fires. Due to the lockdown this year, there have been almost no movement and field activity of people in the forests to collect these fuels.

2.      Oxygen- Strong wind velocity in the hills helps the fire to spread at a monstrous rate.

3.      Temperature- Scientists claim that as a result of climate change, the overall temperature has risen, which further facilities the onset of fires. Atmospheric temperatures are also soaring in March and April this year in comparison to the last.

4.      Less Rainfall- Less rains in monsoons and almost nil rains in winters dried the soil even more resulting in the loss of moisture on earth’s surface. Well, another consequence of global warming! Uttarakhand received only 10.9 mm of rainfall this year and the previous one, in comparison to the usual 54.9 mm. That’s even less than a quarter!

5.      Deliberate fires by locals- the locals set fires for growth of good quality grass, to cover up illegal cutting of trees, for poaching and sometimes to even take revenge from somebody; including government employees.

6.      Other causes- Friction of electricity cables with dry leaves and wood; as well as Lightning are the other causes of forest fires.

The year 2020 and 2021 has accounted for a rise in the above factors which led to the fires grow and spread at a disastrous rate. Among these factors, the forest department can control only fuel load by controlled burning.

The situation is alarming as the peak time of forest fires- the third week of May- when temperature is highest is yet to come. The air quality in the state is majorly gone down as a result of the pollution. The Himalayan region too, is experiencing environmental threats in respect to its ecology, flora and fauna, and increased air pollution.

Here are some of the preventive measures that we can take-

1.      Van Panchayats- They should be given rights and incentives for protecting the forests.

2.      Waterholes- To recharge ground water tables and maintain water in the soils, waterholes should be developed across the mountains

3.      Awareness programs- Local communities should be motivated to protect forests. In addition, they should be educated of the potential environmental threats of fires.

4.      Fight against Climate Change- Well, each of us is somehow responsible for the climate change and global warming. It’s high time we take steps to prevent our environment.

The flames of distress have reached us all across the country. Let’s support and fight it, TOGETHER!